Happy New Year! The Wheel continues to turn to the next age and we move to another Year of the Kingdom or once more return to 998 YK... With this new year we bring on those so determined to bring in the new age; the Kalashtar! Once planar refugees from the plane of dreams; now a lineage of dual mind and spirit beings. To learn more you can check out ECS pg 16, RftLW pg 29, Eberronicon pg 14 and other Eberron resources.

In addition to the Kalashtar Ancestry, I’ve included several Kalashtar items and activities 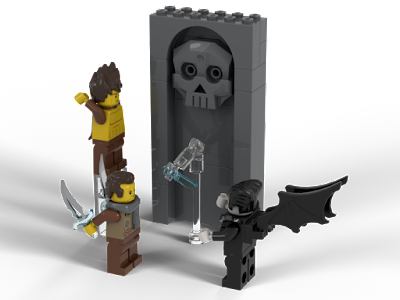 Languages Common, Quor. Additional languages equal to your Intelligence modifier
(if it’s positive). Choose from Draconic, Riedran, and any other languages to which you have access (such as the languages prevalent in your region).

Telepathic You have Telepathy out to 10 feet allowing you to communicate with any creature mentally in your range as long as you share a language. This doesn’t give any special access to their thoughts, and communicates no more information than normal speech would.

Dreamless Kalashtar’s bond with their Quori spirit completely cuts them off from Dol Quor, the planes of dreams. While sleep is mostly just an experience in a void, sometimes it filled with the memories of their Quori Spirits. Kalashtar are immune to spells and effects that require being able to dream such as nightmare and dream message.

Kalashtar Heritages
The kalashtar are heavily influenced by their bonds with the quori spirits and the training to manage this bond but those lacking this training might find life a bit rougher.

ORPHANED KALASHTAR
For whatever reason you were raised outside of a Kalashtar community with no guidance about your dual spirit heritage. Without your cultural education about the bond or how to manage life without dreams  you are prone to mood swings; whenever you make a Save against an Emotional effect you treat all Successes as Critical Successes and all Failures as Critical Failures. Additionally whenever you roll the flat check to remove the Confused Condition your DC is 9.

LIGHTBRINGER KALASHTAR
You have trained to meditate, consult your Quori spirit and help turn the wheel to the next age of light using your mind. Gain the Meditating Refocus Activity.

Meditating Refocus
Concentrate | Exploration
———————————-
Frequency Once per day
You can meditate for 10 minutes and regain hit points equal to your level plus your key stat modifier. Alternatively you can choose to only gain half of these hit points to also be able to regain a spent focus point or regain a use of an innate spell that has limited uses. This is cumulative with any healing you receive from Treat Wounds.

ARTISAN KALASHTAR
With your training and the experience of your Quori spirit you have learned to work with your hands to help turn the wheel to the age of light. You are trained in Craft skill, gain the Skill feat Quick Repair or Specialty Crafting. Additionally start play with a level 2 item.

Dual Mind                                Feat 1
The bond with your Quori spirit that walls you from Dol Quor also shields you from magical influences, especially those associated with sleep. Whenever you are affected by a mental effect that lasts at least 2 rounds, you can reduce the duration by 1 round. You still require natural sleep, but you treat your saving throws against effects that would cause you to fall asleep as one degree of success better. This protects only against sleep effects, not against other forms of falling unconscious.

Subtle Psychic                    Feat 1
You use subtle psychic queues to read people and implant suggestions allowing you to master social situations. You gain a +1 to Deception, Diplomacy and Intimidate. This is an untyped bonus with the Mental Trait.

Psy Weapon Manifestation    Feat 1
Be it a natural gift or training you have learned to use your mind to gather ectoplasm and manifest a small weapon. You gain the following Action.

Manifest Weapon <Single Action>
Concentration | Mental | Occult | Evocation
Frequency Level + Key Stat Modifier
Duration 1 minute
You create a weapon in your hand, choosing the damage type each time: slashing or bludgeoning. This weapon does 1d4 damage and counts as a simple weapon for proficiency with the agile and finesse traits. If you chose slashing damage the weapon has the versatile piercing trait or if you chose bludgeoning it has the shove trait.

Telepathic Adept            Feat 5
You have expanded your telepathic abilities. First your Telepathy range extends to a total of 30 feet. Additionally you gain mindlink as an innate occult 1st level Spell you can cast once per day.

Greater Psy Weapon          Feat 5
Prerequisite Psy Weapon Manifestation
You have learned to manifest a more potent psy weapon and your skill in using it improves. Your manifested weapon now does 1d6 damage, counts as magical for the purpose of overcoming Resistances and now has the throwing 10 feet trait. Additionally if you score a critical hit with your Manifest Weapon you can apply their Critical specialization effect, Knife if you manifest with slashing damage and Club if you manifest with bludgeoning damage.

Evolved Psychic          Feat 9
Prerequisite At least one innate occult spell.
Over time your psychic abilities have grown stronger. You gain telekinetic maneuver, and soothe as 2nd-level occult innate spells. You can cast each of these occult innate spells once per day.
Special: If you have Telepathic Adept you can use mindlink an additional time per day.

Open Telepath              Feat 9
Prerequisite Telepathic Adept
Your Telepathy expands to a 60 feet range and you no longer need to share a language to communicate with a creature via shared mental imagery.

PSYCHIC TATTOO OF MARTIAL FOCUS                           ITEM 2+
UNCOMMON | INVESTED | OCCULT | TATTOO | TRANSMUTATION
Usage tattoo
----------------------------------------------------------------------------------------------
The kalashtar have discovered ways of creating psychically charged tattoos, some decorative while others are functional. This school of psychic tattoos allow the bearer to have weapon runes essentially etched onto them. These tattoos tend to have a soft glow that slowly fades throughout the day and regain their glow during your meditation investment as part of daily preparations. This glow is easily easy to hide under clothes or can be dimmed or rebrighten as a free action when one is trying to be stealthy, and are never bright enough to actually provide light.
Psychic Tattoos of Martial Focus follow the same rules and costs as Handwraps of Mighty Blows except those runes can apply to Kalashtar’s psy weapon manifestations and tattoos do not count as weapons for talismans, in fact tattoos can’t have talismans attached to them at all.

PSYCHIC CRYSTAL OF MARTIAL RESONANCE                   ITEM 1
UNCOMMON | INVESTED | OCCULT | EVOCATION
Price 1 sp
Usage embed (See Embed Psychic Crystal below) Bulk -
Kalashtar and other psychic inclined races have learned to use special crystals to expand or grant knew abilities; imprinting them on the crystal and embedding it into their bodies.This particular psychic crystal allows it user to create a link or resonance with certain talisman’s allowing the to tap into the stored magic.
For the purpose of attaching talismans treat this psychic crystal as a melee weapon of the brawling group with light Bulk but instead of attaching talismans you use the ‘Resonate  A Talisman’ Activity (See Below). If you have the Psy Weapon Manifestation feat you may use also treat this crystal as having the knife and club groups as well.
If the user has a Psychic Tattoo of Martial Focus they may treat this psychic crystal and that tattoo as one item for the purpose of Investing.

Posted by Dark Cloud Blogs at 5:24 AM

So something different today, this is not a conversion. This is an examination of PF2’s versatile heritage Beastkin found in Lost Omens An...